No More Microwaves International cooking for the youthful malcontent. 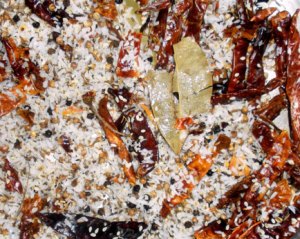 You like your food spicy? Then this is the masala for you. Dried chilies and toasted coconut provide the main flavour punch, while a myriad other spices provide texture and colour. This is a western Indian-style spice blend, and is not for the faint of tongue. It’s hot, and I say that as someone who likes my food fairly spicy compared to the norm. It’s quite hot. You’ve been warned.

END_OF_DOCUMENT_TOKEN_TO_BE_REPLACED

This spice blend is exactly what it sounds like – the masala used to season tandoori dishes, including tandoori chicken. Tandoori chicken, for example, is chicken marinated in yogurt and this spice blend (along with garlic and ginger, perhaps). Of course, traditionally, an abundance of chili powder would provide the red colour we’re all familiar with; most tandoori chicken recipes now ask for red food colouring instead of overpowering heat. This masala will not turn your chicken bright red, but it will provide seasoning.

END_OF_DOCUMENT_TOKEN_TO_BE_REPLACED

It’s becoming increasingly apparent to me that prepared spice blends are a fairly crucial ingredient in great food. At least in a bunch of these Indian dishes I’ve been working with lately. In view of that, I’ve added a “Spices” category to the site to collect spice blends, curry powders and masalas, etc.

This is a North Indian / Punjabi-style garam masala. “Garam Masala” itself is often sold as a separate spice blend, but the name is not necessarily specific to one blend. Garam masala translates as “warming blend” or “hot mix” or something along that line. Different regions of India, however, employ different blends under the same general name. This particular masala is meant to compliment North Indian dishes: for example, the roasted chicken and lamb curries that are popular in North American Indian restaurants are often North Indian in origin or inspiration. Not everyone would suggest toasting this spice blend, but since we’re just making a small amount, why not? It makes the apartment smell fantastic. Anyway, this is a pretty good place to start.

END_OF_DOCUMENT_TOKEN_TO_BE_REPLACED

Once every year or two, I make an attempt at curry puffs from-scratch. So far, no luck, as they’ve always lacked the rich flavour and crisp pastry covering. I can excuse the pastry because the dough I did end up using was tasty in it’s own way, but bland filling is absolutely unacceptable. A good curry puff is delicious on it’s own, and doesn’t require smothering in chili sauce (like mine did). So, to remedy this, I am truly starting from scratch this time, by making my own curry powder to season to filling.

The curry powder I had been using was a recommended brand and was probably fine for the job, but it was a large package of ground powder and probably lost most of it’s flavour over time, thereby rendering it’s effect on the meat unnoticeable. Blech.

Using this recipe, you can get the freshest possible spice blend, and believe me, it’s worth it. I splashed a few tsps of this powder into my Christmas dinner stuffing and the flavour was remarkable. I am anxious to begin my curry puff attempt now, as I predict much improved results. Expect a curry puff recipe here soon!

END_OF_DOCUMENT_TOKEN_TO_BE_REPLACED

Finding international spices is a bitch. The spice rack your mom gave you for a housewarming gift is probably useless. You might have some chili powder in there, and some turmeric. Maybe a generic English-style curry powder (which is kind of gross). But chances are, when you look at recipes from foreign cuisines, you’re going to be missing some ingredients. Spices, herbs, uncommon vegetables and fruits, unpronounceable products and even some stuff that the internets won’t give you a clear idea about. Trust me – it took me months of grocery searching and googling before I made the connection that “dried fenugreek leaves” is sold in Indian groceries under the name “kasoori methi”. And years into my food experimenting, I’m still finding stores and products I’ve never seen before – new sources for new recipes.

If you’re just starting out though, you may be lost when it comes to identifying and locating curry leaves, or asafoetida, or lemongrass, or black fungus. Or even when you get these things, you may not know wtf to do with them. Maybe I know where to find them in Toronto. Post here and I’ll try to help you out with store locations, addresses, even aisle numbers if possible.